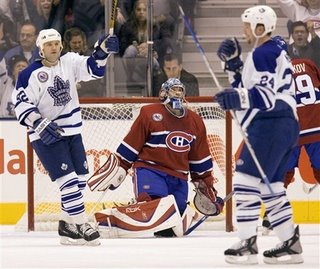 There really isn't much to say about this one. The game had promise to be a close affair until the Habs took the only 5 penalties in the 2nd period, and the Leafs took over the game. The Buds only scored 1 goal on the powerplay in the 2nd, but with all those powerplays, the Leafs outshot the Habs 18-5 in the 2nd frame and took away any momentum that Montreal had.
It was so one sided, that it was boring, but a good kind of boring. David Aebischer started really well, but was pulled after allowing 4 goals on 28 shots in the 2nd period.
JS Aubin played a solid game, allowing only 1 goal on 26 shots. Bryan McCabe and Tomas Kaberle continued their hot streak tonight. Kaberle had 1 goal and 2 assists, and McCabe had 2 goals and 1 assist. Kyle Wellwood was great again tonight, and had 2 assists. Damn he has good hands.
So I guess my question is.......Mats WHO??? The Leafs almost look better without their captain in the lineup. Even Don Cherry alluded to that on Coach's Corner. Then Cherry showed huge amounts of class by offering a great tribute to our troops on this, our Remembrance Day.
Two questions for the Leafs now are: what damage has been done to Darcy Tucker's leg after blocking a point shot by Sheldon Sourray? A deep thigh bruise? The second question is how Mike Peca's face feels after cutting the inside and outside of his cheek after getting hit in the face with the puck.
Oh, and Nik Antropov, good on ya! He is playing really well in Sundin's absence (as yours truly predicted) and had a spirited game playing with Ponikarovsky and Wellwood.