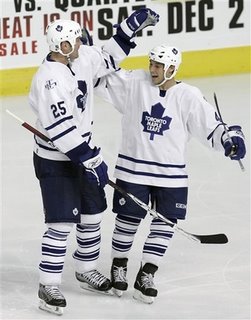 The Leafs just don't quit, and are full of surprises. Tonight Hal Gill and Ian White broke out of their scoring slumps and provided the Leafs with the tying and winning goals in the 3rd period. Gill and White had 26 and 22-game droughts respectively until tonight. Tomas Kaberle, who played almost half the game, scored his 5th goal in 3 games, and is chasing the Rocket Richard trophy. He got his 300th point tonight. Jeff O'neill had 2 assists, and Alex Ponikarovsky got a cheapy empty-netter to seal the deal.
Brad Richards and Vincent Lecavalier had the 2 goals for the sagging Lightning.
Tampa Bay had Eric Perrin's potential 3-2 goal disallowed early in the 3rd because Andreas Karlsson was sent to the penalty box for goaltender interference.

"You've got to be able to overcome that," Lightning captain Tim Taylor said. "I think we all knew as soon as it went in, it was going to be no goal. We killed the penalty off. It had no bearing on the hockey game."


The Lightning have lost 3 straight.
The Leafs are rolling, baby! Woo!