Jason Arnott is no stranger to leg injuries

Share All sharing options for: Jason Arnott is no stranger to leg injuries 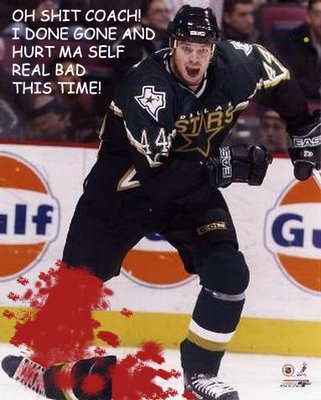 Ok, so I am a twisted man. But Arnott really is an injury prone player isn't he? It doesn't seem like he has ever played an entire season in his whole pro career. Now he is out for 6 weeks so that he can have arthroscopic surgery on his right knee. Yeah, the knee that he severed completely while he played with Dallas all because Bill Guerin wanted to have fun with a chainsaw. To each his own I guess.
This will give Alexander Radulov, who is red hot in Milwaukee, a long term shot with the Stars, as coach Barry Trotz gave him a ring-a-ding today and told him to come and play with the big boys.