Share All sharing options for: How's it going, Luongo? 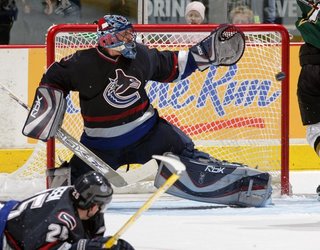 I am definitley seeing the Cujo-Syndrome in Roberto Luongo this season so far. If he doesn't face alot of shots, he doesn't seem to look sharp. Hopefully Bobby can adjust to his new easier life between the pipes in Vancouver, because the Canucks are no doubt playing pretty well defensively in front of him, generally. As a side note, Alex Auld and Ed Belfour are facing the same amount of shots per game in Florida as Luongo does in Vancouver.
Call me harsh, but I expect more from a goaltender who takes up $6 million of a team's salary, much like I think about Markus Naslund. But I would not be so harsh on him if the Canucks had a 12-4 record right now, instead of an 8-8 record. Luongo will need to steal some games soon if the Canucks won't get much scoring done, and really, he should be able to do that, given how defensive the Nucks are playing.
If Alain Vigneault goes with Luongo tonight, I think it is fair to say that he will respond well after being benched last game versus the Ducks. Luongo is a professional.
As JJ has pointed out today, we should see a bunch of juggled lines tonight, as Vigneault desperately tries to squeeze some offence out of these guys. Times could become desperate soon. The Oilers vaulted into 7th spot in the West last night with 17 points (and more goals for than Van). The Canucks are in 8th with 17 points. The surging Avalanche are in 9th with 16 points, and the Flames, who I believe will start rolling soon, are in 10th with 14 points. So the Canucks need to pick it up right about...NOW. If they lose to the Flames tonight and the Avs beat Nashville, Vancouver will be on the outside looking in for the first time all season, with Calgary breathing down their necks. Tonight's game suddenly has a ton of importance to it, doesn't it?
I still say Van wins tonight...2-1.