Share All sharing options for: Gerard Gallant shown the door 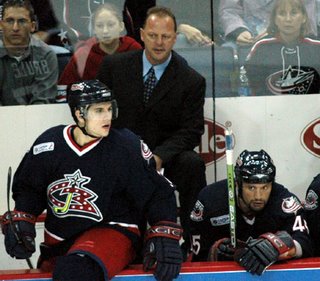 The Blue Jackets needed a change to try to reverse their fortunes, and, as in most cases, the coach gets fired first. Gallant has not had an easy ride in Columbus. After getting off to a positive start this season, the Jackets plummeted down the Western Conference standings, and are currently 5-9-1, for 11 points, and 14th in the West.
Blue Jackets President and GM Doug MacLean said today:

''I am extremely disappointed to announce that Gerard Gallant has been relieved of his head coaching duties with the Columbus Blue Jackets,'' said MacLean. ''Unfortunately, we have not gotten off to the start we expected this season and while there are always a multitude of factors involved, we felt a change was needed.''


Poor Gallant coached the Jackets for 142 games, and compiled a mediocre 56-76-10 record.
MacLean has named assistant coach Gary Agnew as the interim head coach for now.
Whoever coaches the club full time is going to have to find a way to get these guys to play better team defense, and also find a way to motivate players like Rick Nash (11 points in 15 games), Nikolai Zherdev (7 points in 13 games), and the rest of the underachievers to score more. The Columbus stats paint the ugly picture.
And Anson Carter........well his case is near hopeless isn't it?
The team is also banking on Pascal Leclaire to become a bonafide starting goalie this season, as Marc Denis was dealt to the Lightning in the off season.
Leclaire has played 13 games this season, and has a 5-7-1 record, a 3.19 GAA, and a .892 save percentage. It's amazing how a goalie's stats dwindle when the team's defense is sub par.