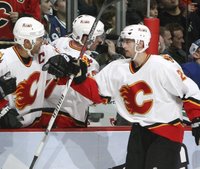 Typical story. The Canucks outshot the Flames 31-25, but could not bury them. They gave up a 2 goal lead in the process. It really comes down to the Nucks playing well and looking to be in control until Jarome Iginla crashed through the Canucks' D and made it 2-1. Rhett Warrener's goal at 5:29 of the 3rd was a stoppable shot that Luongo missed, and it went through his legs a la Dan Cloutier. That made it 2-2.
Kristian Huselius roofed a backhander over Luongo with about 3.5 minutes left in the 3rd, and the Canucks could not find the equalizer.
But they came close. Matt Cooke put a wicked shot off the post with under a minute left, and that was as close as the Canucks got. The puck deflected off the post and all the way out to center ice, where the Flames killed the remainder of the game off.
So..the Flames are on a roll now, and the Canucks are another one of their recent victims. And that is just the problem. Thanks to the Predators beating the Avalanche tonight, the Nuckleheads are still in a playoff spot...but not by much. The Flames are now in 10th spot, and both Calgary and Colorado trail the Canucks by 1 freaking point for the final playoff spot. Crunch time, baby. This is where it gets good...and stressful.
Positives: Markus Naslund is playing like a man on a mission. He just isn't getting the results.
The Canucks were in this one all the way through.
Sami Salo is a Finnish god.
Alex Burrows played his best game of the season.
Negatives: Luongo did not steal this game, and he really HAD TO.
Despite the changed lines by Alain Vigneault, there is not enough scoring out of the Canucks STILL. Sounds like a disease that the Flames suffer from.

1. Jarome Iginla. 2 points and 4 shots on goal.
2. Miikka Kiprusoff. Only 2 goals allowed on 28 shots. Was there when the Flames needed him.
3. Markus Naslund. Played like a captain should play. 100% heart. Good on him.