Edler sent back down to the minors

Share All sharing options for: Edler sent back down to the minors 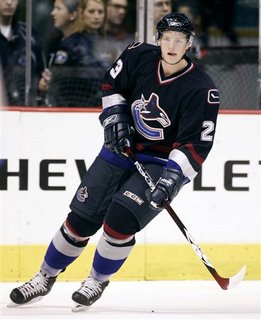 With the return of Willie Mitchell, Alexander Edler has been sent back to the Moose. Patrick Coulombe is staying put on the Canucks' roster for now. I'm not sure why Vigneault is keeping Coulombe in the big league, except for what I mentioned earlier: that Coulombe mightily impressed Vigneault during preseason.
I thought Edler was playing pretty well with the Canucks in his 4 games, but maybe Edler lacks something....
Either way....here are Edler's stats in his 4 games with the Nucks.

Coulombe has played 3 games, has 0 points, is a -5, and is averaging 15:56 of icetime.
What do you think? Who would you prefer at this point? Edler or Coulombe?