Share All sharing options for: Edge interview on NHL.com 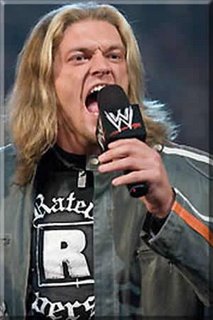 Sweet! NHL.com has a great interview with WWE Superstar Edge on The Last Word.
Here is a piece of it...

So how difficult was it growing up as a Leafs fan?

Edge: The [Harold] Ballard years were pretty abysmal. There were
some lean years there which of course made me despise the Canadiens because they
were one of the dynasties of the era. When I was a kid I would always root
for the underdog, and the Leafs… well, they still are the perennial underdog
(laughs).

Do you remember him?

Edge: Oh yeah, he’s got these big old mitts, that’s why he has a good
punch. He’s a good guy; he grew up in Shelburne and I grew up in
Orangeville, and those are neighboring towns. We ended up meeting up here
and there throughout both of our travels, and I remember I was in the States
watching ESPN and there he was taking out some dude with one punch. I
think it was their "Highlight of the Night" (chuckles).

What kind of player were you?

Edge: Big. I was there strictly to hit and to make sure nobody
got over the blue line.


Edge has some hockey knowledge. Check out the rest of the interview.