The early Vancouver Sun prognosis of the Canucks

Share All sharing options for: The early Vancouver Sun prognosis of the Canucks 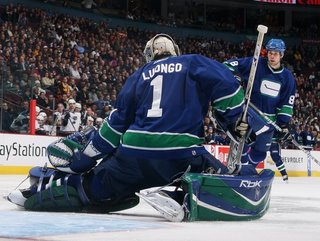 Here is an excerpt from the online Vancouver Sun today.

Twenty-one games into their 2006-07 campaign, the Vancouver Canucks are leaving everyone to ponder the following question:

The Canucks are sitting with 21 points in 21 games, which was average last century but doesn't cut it in today's era of "the loser point" for overtime and shootout defeats.

They are a one-line team with a one-goalie system and a bunch of guys who can't score.

So what's it going to be? We'll give the boys the benefit of the doubt and declare the glass one-quarter full.

The rest of the article is worth a read.

Now, alot of times I really can see why Vancouver is called a "goalie graveyard."
The writer gave ratings for the forwards (2 out of 5), defence (3.5 out of 5), and goaltending (.5 out of 5). I agree with the first two. But to rate the goaltending at .5??!! That is a little harsh. It is unfair to rate it lower than the forwards. Luongo has not been terrible for god's sakes. He has been good, just not great. Dany Sabourin let in his first 2 shots and settled down after that. That shouldn't drop the rating that low either.
What are your thoughts, reader? Are Canuck fans just plain old too damn hard on goalies that arrive here? Are you ashamed of yourselves? Is your angst justified? To me, Mr. Papp's column is indicative of the opinions of a slew of fans, and it only encourages this negative attitude.
Fuck, this media would probably crucify Martin Brodeur if he ever played with the Nucks. Give me a break.
I judge Luongo harshly as well, but I don't rate him at 1% on his report card. He is trying to readjust. He has not stole a game yet. But he has been good. I rate him at
3.5 out of 5 so far.
My final question is, like the Sun asks: Is the glass a quarter full or a quarter empty after 21 points in 21 games by the Canucks so far?