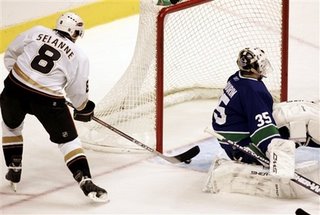 Well, I admit it...I was wrong..I was way off. The Ducks had their way with the Canucks tonight. But let me keep this short, because it is not worth discussing.
The problems tonight revolved around:

1. Roberto Luongo not playing like his superstar self. I realize that the first goal went off Matt Cooke's skate. But after that, Bobby looked human, and he is not paid $6 million to be human. He was pulled after allowing 3 goals on 9 shots. Pathetic. Not good enough. The Canucks needed him to hold them in this one.

2. The Canucks are not getting enough scoring from....well..anybody right now. The Sedins are completely neutralized, and have been for several games now. And the supporting cast is not providing support, offensively.

The bottom line is that the Canucks are good defensively, but are not going anywhere without the offence providing goals...end of story.