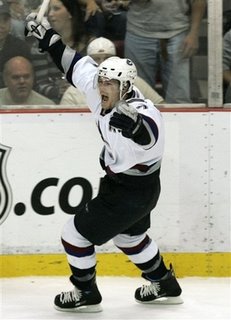 I don't fuggin' believe it! Not only did Roberto Luongo steal this one or, at the very least, play a great game, but Brendan Morrison scored TWICE, including the winning goal in overtime on a breakaway! Stop the press! Morrison is NOT getting traded! Ok, I kid. But you have to think that this piece of work by Morrison tonight lifted a huge piano off his back. You could see it in his facial expression after both goals. Sheer joy and relief.
The Wings were up 2 goals after the 2nd period ended, and all hope looked lost, as they outshot the Canucks 13-6 in the middle frame, and looked in complete control. But Markus Naslund roofed a beauty over a sprawled out Hasek at 4:50 of the 3rd period after a nice setup from the Twins. Then the Canucks got a 'break'. A 5 on 3 man advantage. When it looked like the Wings were going to kill both penalties off, Hasek tripped over his own 2 feet and fell on his ass, right when Morrison got a pass to the right of the goal. Almost without even looking, Mo spun around and put the puck over Hasek and tied the game.
Throughout the game Luongo was making great saves. But alot of the 9 stops he made in the 3rd were of the awesome variety. He kept them in it, even though the Nucks outshot the Dead Wings 17-9 in the 3rd.
The OT was nail-biting. The first 2 minutes of it was 3 on 3, which absolutely RULES, folks. But it wasn't until the 3:01 mark of OT that Sami Salo put a perfect pass on Mo's stick, (who we didn't see on the right side of our screen until he recieved the pass), and Morrison charged in a put the puck right through Hasek's legs just above the ice. I think Hasek expected a deke.
Don't matter. Hell has frozen over and it can stay frozen. Even Ryan Kesler bagged one tonight. Luongo was terrific. And Morrison looked like the Morrison we want him to look like.
What's funny is that one of the guys I was watching the game with, a salesman who used to play for the Red Wings in the 70's, called Mo's performance tonight. I was heckling Morrison to him, saying he was trade bait and in a slump. This guy, Barry Salovaara hushed me and said that he knew Morrison and that he is a good guy, and that he had just been in Michigan to watch some games of the team he used to play with, the Wolverines. Barry said that Morrison was probably getting some inspiration from Red Berenson, who he played with in Detroit and currently coaches the Wolverines. So I thought to myself, "yeah right, what can motivate Morrison this year?" and sure enough, not 5 minutes after Barry said that, Morrison scored his first goal! Hilarious. When Mo got the OT winner, Barry, who is more of a Leaf fan, nearly fell off his chair he was cheering so loud!
I'll post about Barry tomorrow, because today I grilled him for info about playing in the old NHL.

1. Brendan Morrison. 2 goals including the winner.
2. Roberto Luongo. Great game, Bobby.
3. Dan Cleary. 1 goal, and was all over the ice. He is finally getting an offensive chance in Detroit and is capitalizing.

Was that Bulis that missed that wide open net in the 3rd? IF it was, the meter is at 15/10. If not, 10/10. Hey Jan, do you have a mental problem that makes you take dumb penalties in the 3rd period all the time? Quit it!~