Share All sharing options for: Canucks 4 Blues 2 (Final): Suck it! 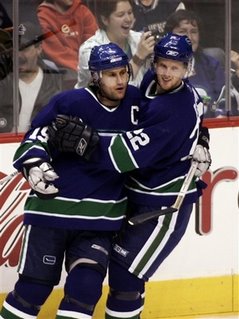 The Canucks look good in this one already, outshooting the Blues 13-6 in the 1st period. Doug Weight scored a beauty on Luongo at the 8:57 mark. He recieved a beauty pass from Lee Stempniak and put a backhander past Bobby. (No, I will not start on Luongo looking like a fish out of water on that one.)
The Canucks replied 6 minutes later when Brendan Morrison, (Brendan Morrison!!!!?????) scored
on Jason Bacashihua on a feed from Matt Cooke. Whoa, Cookie and Mo in on a goal. Next thing you know, Jesus will make a guest appearance...
A couple of beefs...GM Place sounds like a damn graveyard, and the first powerplay unit could use a player standing in front of the opposing net.

What the hell....hades just froze over. Naslund had 2 goals (his 8th and 9th) in the 2nd period and they were beauties! He is playing with heart once again and finally getting rewarded. God this is good to see. The Canucks are consistent. They are still outshooting the Blues at a 2-1 margin, at 27-13. Luongo is having an easy time again. He better not fuck it up in the 3rd.

The Canucks are all over the Blues in the 3rd, outshooting them at the same 2-1 margin once again. But Bieksa takes a holding penalty at the 12:21 mark and booya..Tkachuk tips a shot past Luongo to make this one 3-2. Uh oh....should be a tight finish. I say Burrows gets an empty net goal to finish this one 4-2 Canucks. Hello, GM Place, make some fucking noise...geeziz, what ever happened to home ice advantage? Make some damn noise.
Never mind. Burrows passes to Kesler with under a minute left, Kesler drives to the net, Bacashihua goes for the poke check, misses, Kesler puts a backhander over him and huzzah, 4-2 Canucks and this one is over.

1. Markus Naslund. 2 goals, played like a captain should.
2. Hank Sedin. 2 assists.
3. Jason Bacashihua. He played well in a losing cause, I don't care what you say. Screw Sportsnet's picks.

Hey, what the hell was up with Blues assistant coach Rick Wamsley talking into his watch? What is he? Inspector Gadget?