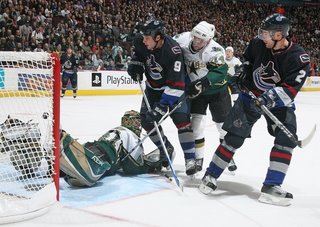 To be honest, I have been a Canucks skeptic for years. There have not been many times since 1994 that I thought the Canucks had a team that would contend for the Cup. I am not saying that I believe they will contend this year either. But after watching the Canucks defeat the super Stars last night, I think they could definitely be on their way to something special.
The stingy Canuck team defence continued their ways in their 2-1 win, allowing 20 Dallas shots. Bobby Luongo looked a lot more reliable last night and made 2 game-savers in the 3rd period. Near the end of the game, Brendan Morrow took a foolish elbowing penalty, paving the way for Taylor Pyatt to score a beauty game-winning goal with only 45 seconds left in regulation.
Not taking anything away from Stars goalie Mike Smith's performance, but the Canucks are not capitalizing enough on their chances yet.

"Yeah, there was some pressure and we had a couple of good chances," Taylor Pyatt said.
"It's tough when you get the opportunities but can't bury it. But we came out with the win and that's the most important thing."


True. It seems that the Canucks are going to win alot of these type of games this year.
BOX SCORE