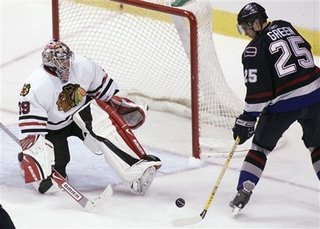 This was a pretty solid game by the Canucks, outshooting the Hawks 39-23, and spending the majority of the game cycling the puck in the Hawks' zone and getting chances. Alot of Canucks mired in 'slumps' really could have broken out of them tonight, but Nikolai Khabibulin played an amazing game. I felt bad for the the Bulin Wall to lose this game after a performance like that.
Naslund capitalized on the powerplay for the first goal, roofing a beauty over Khabibulin after a no look tap-pass by Dan Sedin.
Tuomo Ruutu put a quick wrist shot through Luongo's legs halfway through the first to tie it at 1-1.
Josh Green scored the winner on a rebound goal at 6:47 of the 2nd period, his first of the season.
From that point, Luongo made a few good saves, but it was the Khabibulin show after that. Dang, the Canucks had so many chances...
The Canucks will now head out on the road and play tough teams like Detroit and Nashville back-to-back next Wednesday and Thursday. Then we'll see what they are made of.
Game thoughts:
Canuck pay-per-view is ASS. I like Ronning and McLean, but that older dude is no good, making mistake after mistake. If there is going to be a pay per view, at least make it fucking worthwhile. Show a retro game after every live game...fire the old guy...stop recycling features that we've already seen over and over again.
On to the game....
I can see why Vigneault likes Patrick Coulombe so much. He is playing with such smarts and intelligence. He looks like Sandis Ozolinsh or Brian Leetch of old...
Markus Naslund is playing like a captain should. He laid a guy out, and controlled the play all night long. Good job, Markus.
Ryan Kesler keeps impressing me as well.
Loved seeing Jim Vandermeer laughing at Taylor Pyatt's punches. Pyatt could have gotten the worst of this one if Vandermeer connected with any of those deadly uppercuts.

Luongo rating: 9.5/10
Ruutu beat him with a quick wrister while Lui was moving right to left, through the legs. Otherwise, Luongo was steady.