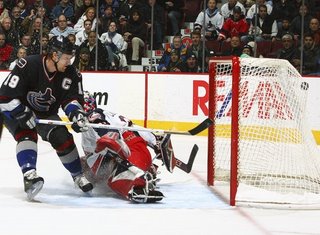 I like how JJ recapped this game, so I'll just leave this post game analysis in point form...

*The Canucks could have scored more than 1 goal, outshooting the Jackets 34-22. But they did not capitalize on their chances AND Pascal Leclaire was solid.
*The only goal of the game by Markus Naslund (pictured) was as sweet as pie. Nazzy charged through 2 defenders and deked Leclaire out of his space boots!
*The Blue Jackets are in trouble. Rick Nash and Nikolai Zherdev are not rolling and looked generally disinterested out there. The Jackets have problems that maybe new coach Ken Hitchcock may not be able to fix. This is why I think Andy Murray would have been a better fix. Hitch is going to preach defence, but the Jackets need offence.
*Every time Anson Carter touched the puck, the Canucks faithful boo'ed him. He did put out a good effort last night, and would look good on the Sedin line still...admit it!
*I thought Trevor Linden played a strong game as well, for all the 7:49 he played.
*Roberto Luongo was good, no doubt, but the Canucks played super-well in front of him.

Zanstorm's 3 stars:
1. Pascal Leclaire. I know, every Tom Dick and Harry gave Luongo the first star because he got the win...but fuck it: Leclaire was better and faced more shots.
2. Roberto Luongo.
3. Markus Naslund. Nice goal. He is playing like a captain should, and I'm starting to admire him. 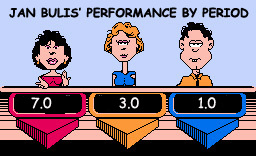 He gets worse as he goes along doesn't he? I find him invisible by the the time the 3rd period comes around.