Bourque as in Rene out / Canucks are in a tight race

Share All sharing options for: Bourque as in Rene out / Canucks are in a tight race 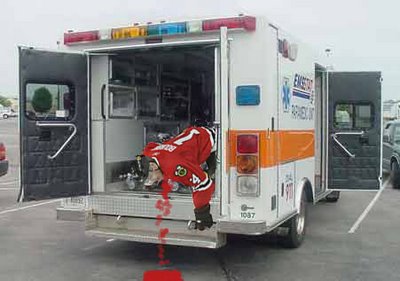 Could things get any worse for Chicago this year? They have announced today that F Rene Bourque will miss the next 3-6 weeks after suffering a deep laceration to his neck in last night's game against Columbus. He was cut by Nikolai Zherdev's skate. Bourque has 4 goals and 8 points in 16 games for the Hawks this season.
-----------------------------
Is it too early to worry about the standings? Some Canucks fans could be watching the schedules a little more closely now that the Canucks are barely in a playoff position.
I suppose we can thank Nashville for shutting out Colorado 1-0 last night. A win or OT play would have put the Canucks in 9th spot in the West. We could also thank St. Louis for soundly beating Edmonton last night, as that kept the Oilers with the same amount of points as the Nucks have, and in 7th spot.
As a bit of a sideshow, here is a quick look at the Canucks schedule, and the schedule of the teams that are around the Canucks in the Western Conference
standings.

Colorado plays: Edmonton tonight, San Jose on Wednesday, then head out on the highway to play Columbus on Friday, and Minnesota on Saturday.

Calgary hosts: St. Louis on Tuesday, Detroit on Friday, and that is it. Easy week for them.

Vancouver gets a shot at Detroit Tuesday night, and plays the Blues on Friday night, both games at home.

The current standings in the middle of the West are:

Yeesh, that is a clusterf**k if I've ever seen one.

The race is on, baby. Buckle up for a crazy ride.