Blue is the color of pain

Share All sharing options for: Blue is the color of pain 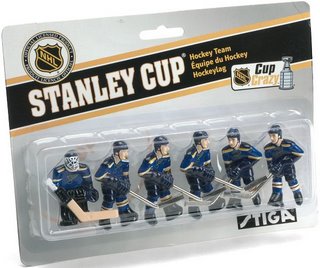 The Midwest is fun for things like donut hamburgers, random large crosses (I actually drove by this one as I was escaping Arkansas) and museums that chronicle the rich history of torturing crazies. In the hockey world it’s a great place to visit since teams often have to suffer through downing the tequila shot Detroit Red Wings before getting to embrace the soothing lime chaser that is the Blackhawks, Blue Jackets or Blues.

Despite beating the Canucks four times last year (jeebus christ), the Blues were still the worst team in the league. Over the summer, John Davidson jumped at the opportunity to lead the "new" Blues in lieu of hanging around MSG and staring at Sam Rosen’s nose night in and night out for another season. JD, to his credit, put together a lineup that were it a few years ago would be awesome to watch every night. But if you fast forward to the present year, guys like Tkachuk, Guerin, Rucinsky (good for nothing!), Dvorak & Weight don’t really put the fear of God in anyone. And their goalies aren’t much better considering I don’t think Manny Legace’s own mother likes him and Curtis Sanford is painfully ordinary (that is, unless, he’s playing Vancouver at which point he becomes the second coming of Ken Dryden).

Prediction: Canucks 10-0. Yes. One-Zero for Vancouver, none for the Tkachuk-uerin-cinkys. Because, in my head, I’d like to think that the growing level of anger I have watching the Canucks fail will spill over into their cognitive processes and make them, if just for one night, play as a group possessed and unstoppable. Daniel and Markus get hat tricks, Kesler adds two, and hell Luongo fires one in when Legace wanders out of his crease to get a new supply of tissues. Even if it’s not 10-0, I’ll take a 1-0 victory. Anything but another loss.

Your ‘WTF’ moment of the week: The new Mark Messier Leadership craptacular award. I can’t say I’m shocked that a Ranger won it the first time around. This award proves the NHL is hellbent on redefining traits to fit their PR since they are ignoring the last decade of Messier’s career. I’m not saying he was not a special player and deserving of great praise, but to use his name as the de facto barometer of leadership when he spent a decade making failed promises and leading - as captain mind you - multiple teams to staggeringly embarrassing losing seasons seems to dilute his precious leadership capabilities. In his last decade of playing, Messier captained three of his ten teams into the playoffs (just for fun, consider Yzerman as captain of the Wings lead his team 18 times into the playoffs, including 15 straight since 1990. But who’s counting?). He promised a cup in Vancouver. Result: failed. He promised a cup in his return to NY. Result: failed. When that whole cup promise seemed out of reach, he flipped to promising a return to the playoffs for the Rangers. Result: failed. By my count, that makes him one for four in promises.

So I eagerly await other NHL-inspired awards like The Sean Burke Domestic Tranquility Award or The Edward Belfour Back Seat Negotiation Award. One for the ladies? OK, how about the Janet 'Domino Motherfucker!' Jones Award? Maybe this can spread out to other leagues too. How about The John Rocker Multicultural Award or the Roger Clemens Gentlemanly Award for MLB? For the NFL, we'll definitely need a Randy Moss Team Spirit Award and The Ray Carruth Family-First Award.