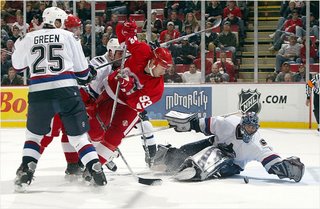 Things to ponder for this evening in Motor City

1. Will they continue their excellent penalty kill (currently fifth best in the league)?

2. Will their powerplay ever ever EVER turn around (currently fourth worse in the league)? A small note: I don't think the dump in works as well as they think. They need to think of something else.

3. Will baby jesus cry if Luongo gets shelled and pulled?

5. Will Lidstrom shoot from center ice just for shits and giggles? If he does, can someone strike him? In the groin? With a sledgehammer?

6. Will Kesler pick a fight just so he can score a goal?

7. Why is Chelios still playing? Can’t we, as a league of fans, do something to make him retire? Where’s Messier’s leadership on this topic?!

Things to ponder for Thursday night in Naaaaaaaashville

1. Is it a cosmic delight for anyone else that, after knocking Mitchell out, Arnott will get to sit his ass until 2007 because of a knee injury?

2. Seeing how Dany Sabourin will get the nod against the Preds, is it possible he won't let in the first two shots? If not, does that mean Mika Noronen will be laughing his freezing arse off over in the motherland?

4. Is it possible that Patrick Coulombe’s secret hockey weapon is that he plays while totally stoned (as suggested by his kick ass Canucks.com picture)?