Avalanche 4 Canucks 1: Return of the Wolski

Share All sharing options for: Avalanche 4 Canucks 1: Return of the Wolski 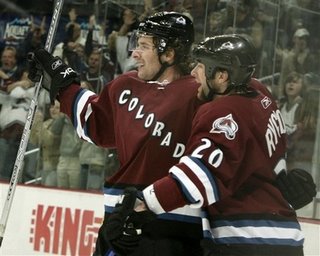 Wojtek Wolski was a healthy scratch in Colorado's last game against the Ducks, as Joel Quenneville was not happy with his play.

"I was upset with myself that I didn't play the last game," said Wolski, a healthy scratch in Colorado's last game against Anaheim for less than satisfying play. "I think you have to take it as information you want to use to get better and to learn from."

"I think I did that," Wolski said.


No kidding. It couldn't have worked any better to motivate Wolski, as he took it out on the Canucks last night. He had an amazing 1 goal and 3 assist performance.

"Consider the message received," Quenneville said. "I saw better overall play from him and it extended to his line."


Wolski played with Mark Rycroft and Paul Stastny. Rycroft scored a goal, and Stastny had 1 goal and 2 assists.
These guys were so good, that Joe Sakic's line was almost non-existent.

The Canucks lost this one for a few other reasons, and it was not Roberto Luongo.

The loss of Daniel Sedin completely neutralized Hank Sedin, who looked either lost or not interested in this one at all.

No hands. There is not enough skilled personnel to get the job done offensively out there. If Alex Burrows had Naslund hands, he could easily have had 3 or 4 goals last night. He was everywhere, and had a hell of a game. Just no finish...
Even Jan Bulis was super motivated in the first half or so. But he can't capitalize on his chances either.

The Avalanche are naturally a faster team and it showed out there. They skated and moved the puck much faster than the Canucks did.

Zanstorm's 4 stars
1. Wojtek Wolski
2. Paul Stastny
3. Jose Theodore
4. Alex Burrows. Congrats, Alex, you and Luongo were the only 2 Canucks to show up last night. Great job out there.

Jan played a very spirited game right from the start, but then made some defensive blunders and tallied off toward the end of the game, and I think he was benched.
For his initial extra effort, the meter drops a little. Jan, if you ever put together a consistent game thru 60 minutes, your return value would be better when we trade you! C'mon!
Drawing inspiration from Temujin, who mentioned the idea, I can also break his performance down period by period, as I've hired 3 judges. The guy on the right looks stupid, but believe me, he knows what he is talking about! I thought he was being a little generous, actually!