Are the Flyers going to break out?

Share All sharing options for: Are the Flyers going to break out? 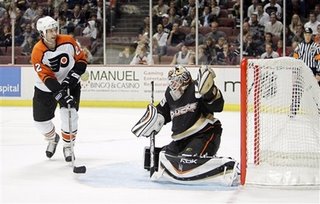 After the Flyers 'decimated' the powerful Ducks last night, you have to wonder if maybe they are on to something, or maybe they will finally break out. I have a couple of thoughts on this.
That was a fun game to watch no doubt. What I saw was an off game by the Ducks, and an underestimation of the Flyers by them as well, and the Flyers buried their chances. Hell, they scored 5 goals on 12 shots in the 1st period alone. After the 1st period ended, the Flyers only managed 4 shots TOTAL in the 2nd and 3rd period. The Ducks outshot Philly 41-16 overall, and the score was 7-4?! This is the lowest scoring team in the NHL?
I would blame this one more on the Ducks coming out flat than 'the Flyers have turned the corner on their piss-poor season'. I still see signs of a team in Philly that has lost it's confidence and is suffering from a 'losing mentality'. Even when the score was 5-2 going into the 2nd, I had a strong feeling that the Ducks would come out flying and that the Flyers could blow the 3 goal lead. It could have happened. Fragility. The Flyers still have it. Their problems are not going to go away over night.
That being said, they get to play the mediocre Kings tonight. If they can take any positives from the game against Anaheim and soundly beat the Kings, and put them away without too many lapses, they may be on the right track to ditch the 'losing mentality'. I just wouldn't bet the farm on it happening.

As a side note, can you believe that this was the first time that Duck fans have seen the Flyers play in Anaheim since November 22, 2003? Yeesh. What a dumb schedule.