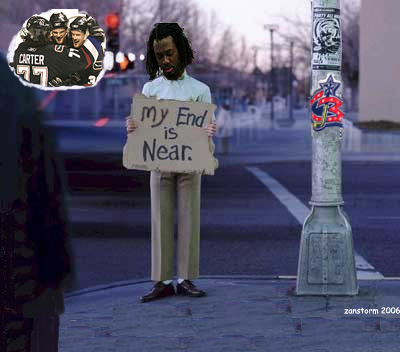 You have to wonder if Anson Carter misses his former linemates Daniel and Henrik Sedin. This season in Columbus, Carter has 2 points in 12 games, is a -2, has only 9 shots, and is averaging about 11 minutes icetime per game. This is not Anson Carter earning his $2.5 million salary. Truth be told, almost every hockey fan saw this coming, right?
But hey, he is still getting paid...for now. His deal with the Blue Jackets is only for one year. If he continues his mediocre play, he will force his inflated value down the toilet, and who will sign him next summer? Anybody with a brain in their head wouldn't bite on this guy at that price....however...
Taylor Pyatt is clicking with the Sedins right now, but he, and anyone else that Alain Vigneault puts on the Sedin line, may not have the success that Carter did with the twins. It is too early to tell.
Maybe Carter will take a cut next summer and resign with the Canucks. Maybe the Canucks will make room for him. What do you think? Would you oppose? Right now, I would rather pay Carter $2.4 rather than pay Cooke $1.5 and Morrison $3.2 million. Just a thought.