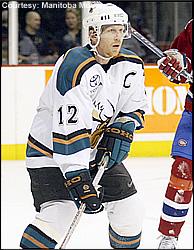 It takes a guy all the way from New York to agree with me. The following is from Larry Brooks of the New York Post.

Keane, a three-time Cup winner with Montreal, Colorado and Dallas, hasn't been in the NHL since 2003-04. He's working on an AHL contract under which he's earning less than $100,000. But he's playing, and playing well, having recorded five points (3-2) in his first nine games.

In New York in 1997-98, Keane seemed to be a disinterested mercenary, just like so many of the free agents who, uh, checked in during the Lost Years. Funny how almost a decade later, nothing could be further from the truth.

He's a player who wants to play the game, period. He's a player who enjoys teaching. The NHL is all about speed now. But if the league is looking for a minimum-wage bargain, there's one available in Manitoba.

Why did the Canucks give up this guy? Because he's 39? Last time I checked, Mike Keane still has wheels and more ability to put the puck in the net than Burrows, Kesler, and especially Linden. I wouldn't mind seeing him get one more shot somewhere.