Yes, the Canuck games are boring....BUT

Share All sharing options for: Yes, the Canuck games are boring....BUT 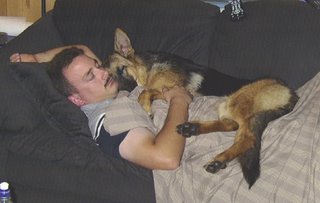 Canuck games got you sleeping on your couch? Don't like the new boring style of the Canucks? Well, TOO BAD! It isn't going to change soon methinks. Alain Vigneault's new defensive coaching style may remind you of the Wild or the Devils, but who cares? It works doesn't it? It angers me when I hear Canuck fans complain about the games being boring. Do you want the excitement of the last several seasons under Marc Crawford? Sure, if you crave disappointment.
For once the Canucks look composed on the ice. They are playing better team defence. Hell, even Markus Naslund is backchecking every game, rather than floating around and letting someone else do the dirty work. My appreciation level of him is at an all time high because he is showing heart.
2-1 games are going to be a reality from this point on until...
1. The Canucks get secondary scoring from the rest of their lines
2. They adapt to playing good defensively AND offensively
3. They trade for players that can get the job done.

My honest answer here is all of the above, but especially #3. I really hope that guys like Cooke, Chouinard, Bulis, Pyatt, Burrows, and Morrison will all score about 20 goals each. If the majority of them score 10 or less, this team may not be going anywhere. The Swedish Touch line can't do it all by themselves.
However, Markus Naslund is now on the hot seat, as is Morrison. Naz will need to score about 100 points to earn his $6 million salary or he's gone, and really SHOULD be gone if he underachieves this year. Morrison will need about 70 points to survive.
It's not a wrong thing to say. It's a reality. The salary cap forces teams to spend money wisely, and DRAFT wisely. They almost can't have two $6 million players on their roster unless the rest of their team is made up of cheap NHL-ready, productive players, much like what the Ducks have. THAT is a rarity. THAT is something the Canucks do not have.
So Alain Vigneault is left with coaching a stricter defensive policy and hope for the best. It may be boring hockey, but so far, it's turning horse shit into honey. (Having Roberto Luongo doesn't hurt either! He's worth every penny isn't he?)
If Marc Crawford's exciting ways were still in Vancouver, the Canucks would be winless right now....admit it.