Share All sharing options for: Wild One in Toronto! Leafs 5 Flames 4 (Final OT) 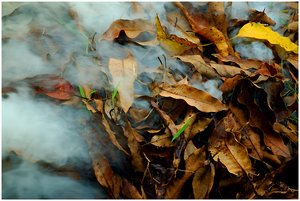 So far, the Leafs are putting out the Flames in a real beauty of a game.
The Flames looked completely uninspired for the first 20-30 minutes of the game, and the Leafs were outshooting the Flames about 20-6 at that point and leading 2-0 on goals by Darcy Tucker and Mats Sundin. Jim Playfair's face looked like there was a gun pointed at it....when all of a sudden, about 4 minutes into the 2nd period, Mark Giordano, a Flames rookie and Toronto native, bangs the puck over the line, to bring the Flames out of their slumber. Less than 3 minutes later, Matthew Lombardi scores a shorthanded marker. Three and a half minutes after that, Giordano scores a beauty after charging out from the corner, and the Leafs have blown their lead, and Giordano is writing a hell of a story.
But hold on a minute! At 17:38, Alex Steen knocks in a loose puck after a mad scramble with Kiprusoff out of commission, and the Leafs tie it 3-3, when it looked like the Flames were going to take over. And about 1:10 later Captain Mats wrists a shot right over Kipper's shoulder to put the Leafs ahead again. This game is a beauty, and the 3rd period is going to be insane...
------
Wow, the Flames tie the score from out of nowhere on a goal by Daymond Langkow at 12:00. He took a pass from Iginla and roofed a perfect shot over Raycroft's shoulder. This after the Leafs controlled the play for the first 8 minutes of the period. How opportunistic...and unfortunate.
The rest of the period is all out intensity with chances on both ends, but Kipper and Raycroft keep the puck out. Holy Hell, the Leafs' top line is amazing. Wellwood is a god amongst men...
Wait a minute, who the fuck is that ref??? He calls an absolute phantom call on Darcy Tucker with 5 seconds left. Tucker never held him up!! FUCKER!!!
Here comes OT, shorthanded because of a bonehead referee. Shit! There weren't any penalties called in the 3rd up to that point...
OH WAIT! FUCK IT! Mats Sundin comes over the blueline shorthanded in OT and blows a shot by Kiprusoff from 30 feet out! LEAFS WIN!!! SUCK IT!!! Mats gets a hat trick, and the winner is his 500th career goal!! Wow!!!!!
Is this guy any good or what?! Wooo!
And now the picture for this post is complete...Leafs douse the Flames!