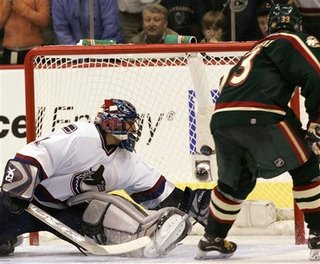 Some questions abound with the Canucks' loss to the Wild tonight. This is still the best team defence that this team has played consistently for years. Even though the shots were 35-30 in favor of Minnesota, the quality scoring chances from both teams was limited. Both Roberto Luongo and Manny Fernandez were solid in goal, with Luongo making more difficult saves, especially the stop on the breakaway in the 3rd by Todd White. Vancouver didn't take any penalties until the 3rd period, amazing grace! And unfortunately the Wild converted on one of the 2 penalties that the Nucks took in the 3rd to tie the score at 1-1. But at least the Canucks (who were 0-4 on their PP) gave themselves a chance to win by not taking too many dumbassed penalties. In the end it came down to a shootout between two evenly matched teams, which is where the negatives start. Luongo only stopped Brian Rolston's shootout attempt, which was a brilliant save, but Rolston couldn't roof the puck with Luongo down and nearly out. And that is just what the Wild did to expose him. They would fake a shot, Luongo would freeze, and then they would deke right and put a backhander over top of the sprawled out Luongo. Only Demitra tried something different by starting far right, coming in quick and wristing a shot over Luongo's blocker side. But hey, I can't bash Luongo because he is a goaltending GOD!
Manny Fernandez played the shots more casually without putting himself out of position. But Naslund and Morrison both put the puck through his legs on their goals. He stopped Daniel Sedin and Bulis on their attempts, paving the way for Petteri (who?) Nummelin to score the shootout winner.
The glaring question now is 'where the hell are the Canucks going to get their scoring from?' The secondary scoring needs to happen on a more consistent basis. Every line but the 'Swedish Touch' line is NOT consistently producing. This will need to change to secure success, because I really like the rest of the Canucks' game. It is so much more controlled.

*Jan Bulis sucks. He is more streaky than a dirty pair of underwear. He will be a headache all year.
*Ryan Kesler got smoked along the boards by Kurtis Foster and left the game with what could be a mild concussion.
*Sammi Salo left the game earlier with an undisclosed injury after just over 10 minutes played....oh shit!!
*Luc Bourdon only played 7:57, prompting me to wonder how much Vigneault trusts him.