Who is Dany Sabourin?

Share All sharing options for: Who is Dany Sabourin? 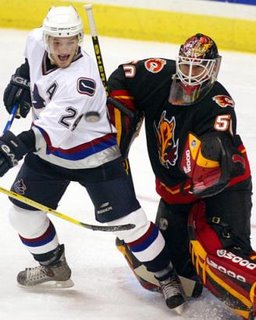 The Canucks claimed goaltender Dany Sabourin off of waivers yesterday. Sabourin, 26 was drafted 108th overall by the Calgary Flames in the 1998 entry draft. He only played 4 games for the Flames in 03/04, posting a lousy 3.55 GAA, and a weak .848 save percentage.
He was then taken as a free agent by the Pittsburgh Penguins in 2005, playing in 1 game, and allowing 4 goals on 21 shots. So already this info is pasting him as a sieve, right?
Well last season with the Wilkes-Barre/Scranton Penguins
Sabourin faired better. He had a record of 30 wins, 14 losses and 4 OT w/l, a 2.26 GAA and a .922 save percentage. He was voted the top goalie in the AHL, and was named a 1st team allstar. So the jury is out on Sabourin.
Yesterday, Dave Nonis told the Canadian Press:
''We've put a lot of faith in our goaltending coach (Ian Clark) who's got a good feel for him. We did play against him last year with (AHL) Manitoba and he played very well against us. Clarkie feels he's a guy who's gotten better every year. He was one of the top goalies in the American League last year and we feel he's ready to make the next step to the NHL.''
Well, with last year's credentials, look for Sabourin to replace Wade Flaherty as Luongo's backup as soon as Flaherty fails.