What to expect fom Dallas tonight

Share All sharing options for: What to expect fom Dallas tonight 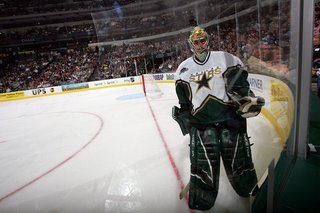 Marty Turco has lost his marbles. He now stands in the corner, as shown, and waits for pucks to come to him and for the photographer to throw him some candy through the peep hole. The worst part is that it's in the no-goalie zone, so the refs keep penalizing him. I think he is expecting Sergei Zubov to don the pads and play goal for him so he can stand in the corner.
In all seriousness, the Canucks have their hands full tonight against a red hot Stars team that preaches the same defensive style that Vigneault does. The biggest difference is that the Stars have a buttload more talent than Vancouver does, so Roberto Luongo is going to have to be extra sharp.
The Stars are 7-1 to start the season and don't look to be slowing down anytime soon. They are getting scoring from all lines. In fact, only Matthew Barnaby doesn't have any points. New captain Brendan Morrow is thriving in the leadership role, and is leading the team with 9 points. New Star Mike Ribeiro, the Spineless Star Weasel, is second with 7 points. But the biggest positive for Dallas is the play of Marty Turco. He is tied with Ryan Miller for top spot in the NHL with 6 wins, he has a 1.98 GAA and a .930 save percentage. So unless he has a rotten night, the Canucks are going to be in tough.
This really could be a great goaltender battle if Luongo doesn't let the first shot in. It will also be a battle of defence and who will crack first. The Canucks have to score the first goal...because we know how good Dallas is after they score first.
The loss of Willie Mitchell will hurt the Nucks. I say this one will be close, but the Stars will prevail 2-0. I never said I was always a positive person. But to throw a positive spin on it, the Canucks DID beat a streaking Predator team last week, so you never know.
Start time: 5:30 on Sportsnet Pacific.