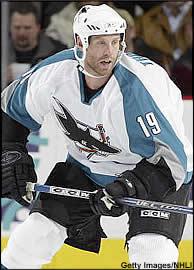 The boys finally get a home game and a chance to let the locals get a rink side view of Luongo and, well, the rest of them. Sadly it comes with a revoltingly strong San Jose Shark squad visiting GM Place, but they will be playing their third game in five nights whereas Vancouver has been off since losing to the Wild in a shootout Tuesday night.

What to watch for #1: Secondary scoring. The Sharks top line of Smith, Thornton and Cheechoo have the luxury of taking a night off since their second line of Marleau, Michalek and Bernier can get the job done. Vancouver can't say the same; outside of the Sedin/Naslund line (you're on crack if you think I'm calling that the Ikea line) the likes of Morrison, Pyatt, Bulis, Kesler, Cooke et all have not truly got going yet (unless you count untimely netural zone penalties). Could tonight be that night? Something tells me no, but let's pretend the home crowd gives someone an extra reason to get pissed and productive.

What to watch for #2: The battered D line. Sami Salo has subscribed to the long list of guys who get wonky groins early in the season, so he'll be sitting tonight. The thin blueline just got a bit thinner and now has no choice but to point rely very heavily on Kevin Bieksa and rookie Luc Bourdon. Insert your favorite curse word here (bonus points if you can couple in a family member in the process and create an entirely new curse phrase: "father fucker", "uncle shitface", "cousin shittybitchhead". It's fun for the whole family, honestly).

What to watch for #3: Goalies. Roberto Luongo is clearly the man after four games. He has yet to be beaten in those oh so fun clear and unobstructed ways that Dan Cloutier’s GAA seems to suggest he is still excelling at. However, the Sharks can counter with not just one #1 goalie but two in Toskala and Nabakov. The latter got torn apart by the Oilers last night though so assume Toskala will be in net.

Who’s going to win? The Sharks. I will admit this is partly due to the fact I’m still used to the Canucks letting me down and this season they seem to be correcting that reflex. However, even a tired Sharks team is a formidable opponent and the Canucks scoring thus far has relied on their top line, seizing on opportunities during line changes or defensive mistakes by the other team. Vancouver’s D will be busy all night (Bourdon? Are you familiar with the phrase "trial by fire"?) so it’s imperative the Luongo plays out of his mind again while the defensemen have no mental hiccups. Vancouver only wins this game if all four lines contribute…by which I mean at least two or three lines contribute far more then the vague "team effort" contribution and, rather, put some pucks in the net and get on the scoresheet. Assuming the team concept is still a work in progress, I’ll give the edge to the Sharks.

Need something to get angry at? The damn Vancouver newspapers. I recognize sports columnists and sports radio (I work in radio, trust me) beat minor issues to death because content is content. But, seriously, this whole trap thing discussion is boring me. Is this what passes for fine editorial copy: stating the obvious? Of course the Canucks are going to trap from time to time and far more frequently then they used to. So what? If it works, then shut up. If it doesn’t, they’ll figure something else out. But claiming it gives you (or rather the collective ‘we’) a poor product is piss poor reasoning and proof that some people, clearly, can’t accept change.

If you want a run and gun game and that’s it, then please by all means go cover the Kings. They have Crawford, they have Cloutier, they have young fast rookies & they’ll play that game all year long. From what I can see, they have a staggering three more goals then the so called boring Canucks. I also seem to every playoff bound team past the first round last year had some sort of defensive-minded system over a cherry picking Pavel Bure mentality. So accept the winds of change (that’s right, I invoked a Scorpions song. I hope the chorus gets stuck in your head and you start inadvertently singing it) and move on.