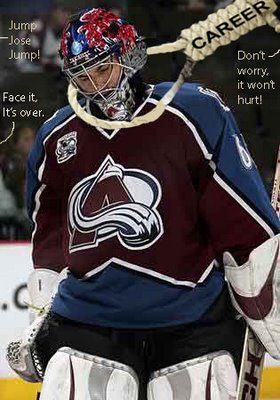 After Jose Theodore's not so heroic effort in his return to Montreal on Saturday night, you have to wonder what the immediate future holds for him in Colorado, or even the NHL for that matter. Theodore started well for the Avs that game, but proceeded to allow 8 goals against down the stretch, the most goals against him in one game in his career. The real meltdown occurred half way through the 3rd period with the score tied 5-5. Theodore allowed 3 goals in a span of 3 minutes.
Talk about saving your worst for the best time. The fans in Montreal jeered and taunted him the whole game. The thousands....and thousands in attendance chanted his name to get him off his game. Must have been a shot to the nerves.
Alot of people are wondering if Jose should have got the start in the first place. The Avs were on a roll with Peter Budaj in net. But now we know where Jose stands under pressure, and it ain't pretty.
He now has a 2-3-1 record with a 3.68 goals-against average and a .877 save percentage. Peter Budaj, smelling opportunity, is 1-0-1 with a 1.98 GAA and a .934 save percentage.
At some point you have to wonder if Theodore is ever going to regain his Hart Trophy form. My guess is no way Jose. He has been given enough chances. At a $5.5 million price tag, how much patience do the Avalanche brass have with him? Even if he fails, who in their right mind would ever take this guy on via trade?
It all adds up to Jose's NHL career coming to an early ending, or at the very least a huge risk of that happening. I know coach Joel Quenneville defended his goalie after the game.

"Power plays put them back into the game, so it wasn't the goalie's fault."


That is true in part, but Jose didn't look too sharp as the game went on, did he?
Theodore had this to say:

"After the first couple of saves I felt good and the whole first period I felt great. But it was a power-play kind of game tonight."


You have to think that somewhere inside, Quenneville's patience is running out, and the clock is ticking on Theodore's time as a #1 goalie in the NHL.
For perspective of the game from an Avalanche fan, visit Tapeleg.