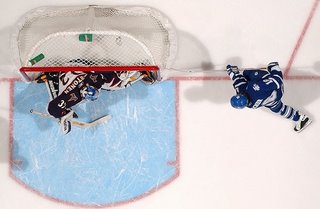 So flip my pre game predictions upside down and shazam, the Leafs win a wacky one. This is the first time they have won consecutive games this season, so forgive my negativity prior to this one.
Ilya Kovalchuk scored a beauty, using Ian White as a screen, at the 8:12 minute mark of the 1st period. But then the Thrashers got into penalty trouble minutes later, and the Leafs scored 3 consecutive powerplay goals in a row within 2 minutes on goals by Darcy Tucker, Tomas "I'm on a killa streak" Kaberle, and well...Darcy Tucker again. The Leafs' powerplay is clicking? Pinch me I'm dreaming. They were 3 for 7 on the night.
The Thrashers never recovered from that, even though they outshot the Leafs 33-22 in this one.
A wacky stat? There were 3 delay of game penalties tonight: 2 by TO and 1 by Atlanta. All 3 delay of game penalties created 5 on 3 opportunities.
Leaf coach Paul Maurice made funny faces to the press after the game, calling this one: "funny"
I found Michael Peca's post game comments interesting.

"I find (skilled) teams with the makeup like Atlanta .. want nights off from time to time. It was our goal to drive up the tempo and energy and give them a reason to not want to engage in this game."


The Leafs have now beaten the Thrashers 5 straight times since the 05/06 season, and have scored 26 goals on them, and only allowed 5. Wow. Total obliteration. Who's next?
BOX SCORE