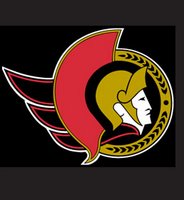 OK, here's a not-so brilliant quote from the Senator's coach this offseason:
"I think some of our players found out that talent alone doesn't (win a Stanley Cup,)" Senators coach Bryan Murray said, "(This year) it's more of a blue-collar approach."

Oh, that was insightful, Bryan! So you just figured that out? What sport have you been watching for the past 4 decades...golf?
Once again the Sens are projected as having the best odds to win the Cup by some Vegas line or whatever it was...6-1 odds. But I think that alot of hockey fans have given up on assuming that anymore.
It seems that the last last thing that the Sens want to feel like is the 'favorite.' Maybe they should drop about 5 places in the standings and go in as the underdog! Ok, not going to happen.
Without sounding too much like Don Cherry, I think that this team is not going to win anything with Daniel Alfredsson as the captain. He may be a good leader in some areas, but generally it's a joke. This team needs a warrior as a captain in my opinion, and Alfie just isn't that. He epitomizes one of the teams' biggest problems...he's great in the regular season, but can't step up to the plate in the playoffs.
I think that Sens management backed up bit of what Murray said by getting rid of Havlat, and adding guys like Corvo and Preissing on defence who will offset the loss of Chara. And with youngsters like Patrick Eaves and Denis Hamel solidifying spots on the roster, the Sens have better character now.
The real question will now lie in the capability of Martin Gerber, and how hungry this team will be come postseason.