Stars 2 Canucks 1 in a sad one

Share All sharing options for: Stars 2 Canucks 1 in a sad one 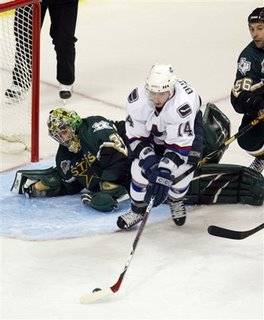 This game really angered me to no end. The Canucks scored within the first 2 minutes on a goal from Daniel Sedin on a brilliant setup from Henrik and Taylor Pyatt.
But Niklas Hagman scored a flukey goal about 36 seconds later from the point that Luongo really should have had. But the puck skipped over his stick and trickled into the net. Fuck. The Canucks were up 1-0 and would have contolled the game at that point, being up a goal. After this point there was intense action, even though both teams didn't give up alot of quality scoring chances. The Canucks had so many blooming positives after Hagman's shitty goal. They played tight defence and generated a hell of alot more scoring chances than Dallas did, out shooting the Stars 19-12 going into the 3rd period. The Sedins looked invisible tonight, but guys like Chouinard, Linden, Kesler, and especially Burrows were playing phenomenal, but couldn't capitalize on their chances.
Which leads me to the turning points of the game.
The biggest differences of the game were the Canucks' inability to convert on the powerplay (0 for 6) and the phantom calls in the 3rd period on Bieksa especially who really didn't hook the Stars' player on his break to the net. That penalty gave the Stars a 5 on 3, which they capitalized on, on a goal by Mike Modano. The Canucks were so sound up to that point that once again, Luongo did not have to be brilliant tonight. So, a fucking silly call ruined the Nucks on this one. It really angers me, because it was a waste. From that point, the Canucks had 1 more powerplay opportunity, but couldn't capitalize. And really, all bitching about phantom calls aside, the Nuckleheads needed to capitalize on the PP to win this one.
Plus, Marty Turco shut the door when he had to, as the Canucks outshot the Stars 34-26.
To be positive, the guys like Morrison, Burrows, Linden, Green, and co. looked so much more impressive. Luc Bourdon played 9:58 and looked solid out there. Good for him.
The Canucks were so close to deflating to stinking Stars. Hopefully they can keep their heads up, draw from this close loss, and absolutely destroy Chicago and Washington in the next 2 games.
My one drunken question is...Vigneault, why didn't you leave Pyatt on the Sedin line??? It was working for you earlier...But he kept changing his lines impatiently...