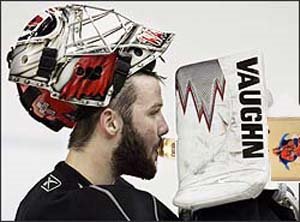 The Florida Panthers defeated the defending Stanley Cup Champion Carolina Hurricanes 6-3 tonight. Gary Roberts and Ollie Jokinen both had 2 goals. Jokinen finished with 4 points. The Panthers have now scored 14 goals in their first 2 games at home (a franchise record), but only scored 1 goal on their 2 game road trip. Alex Auld stopped 32 of 35 shots.
What the hell is wrong with the Canes? They are winless in their first 4 games (0-3-1), have scored 7 goals and allowed 18 goals against. Cam Ward has been anything but his stellar self from last season. (John Grahame was in net for the Canes' loss tonight.)
Bret Hedican said it best after the game: "We know we've got to get in the win column and turn this thing around, and we've got to start as soon as possible."
Perhaps just one win can get the Canes rolling again. Maybe it won't. It is so ironic that many people predicted the 'Cinderella' Oilers to stink it up this year and for the Huricanes to finish near the top of the East. So far the exact opposite is happening.
So why the Cup hangover for the Hurricanes? Is it because...
1. Cam Ward is drinking too much Captain Wardans? (haha, that's only my 2nd Photoshop ever...I'll get better at it!)
2. the Canes as a team can't get up for games after taking it all last spring, like the Lightning did?
3.the youth on the team won it all in their rookie and/or sophmore years and are unmotivated?
4. players like Cam Ward got their raise in the offseason and are unmotivated because of that?
5. the losses of Aaron Ward and Matt Cullen to the Rangers hurt the character of the team?
6. the injured Frantisek Kaberle is the second coming of Tomas Kaberle?
7.the loss of Corey Stillman is a pivotal blow?
8.the teams playing the Canes are out to prove themselves against the Champs?
I guess it's a combo of all the above. Ward is going to have to step it up soon to win a few for the struggling team. That may be the first step. The second step is just to win their first game and then rally around that, and get some work ethic and chemistry going.
I really won't underestimate the value of a guy like Cory Stillman either. He is missed I'm sure.