Sharks 6 Canucks 4 - The Sharks Strike Back

Share All sharing options for: Sharks 6 Canucks 4 - The Sharks Strike Back 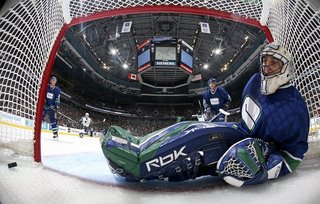 I think I need a calculator to add up how many things went wrong for the Canucks tonight. For one, Roberto Luongo looked human in net, but he also faced 37 shots. The final 2 goals by Mike Grier and Curtis Brown were breakaways. Unfortunately, these goals deflated the Canucks, who were on the verge of a comeback. But the biggest nail in the coffin was Brown's goal after the Canucks failed to convert on a 2-man advantage.
There is still no secondary scoring on the Nucks offence. Alain Vigneault continues to juggle the 2nd, 3rd and 4th lines to find it, but it's not happening. Time will tell.
A big positive tonight was the play of Kevin Bieksa. He flourished with the heavier workload in Salo's absence and had 3 points (1 goal and 2 assists.) Another positive was the Canucks' coverage of Joe Thornton and Jonathan Cheechoo. Both were limited to zero points and were -2 on the night. But the Sharks got goals from every other line tonight. It really is freaky how much depth the Sharks possess.

Goats:
Luc Bourdon. He looked slow and out of position for all of the 4:41 he was on the ice. No love from Vigneault.
Trevor Linden. Was he benched? I don't remember seeing him in the 3rd period especially.
Every forward not named Sedin or Naslund. It's obvious isn't it?

Hodge had the line of the night. He thought that Roberto Luongo should have his nickname changed from Yo Luongo to Yo Hygiene! Why? Because Roberto changes pads between periods......