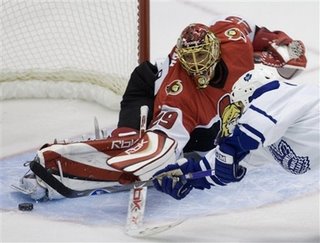 After Hap Day, Red Kelly, and Borje Salming were honored during the pregame ceremonies, the Leafs played inspirational hockey for the whole first period. The Senators looked completely sluggish for the first 19 minutes of the first, until bonehead Wade Belak took his second penalty of the period, and Patrick Eaves bagged a rebound goal. Martin Gerber stole the show in the first period, and Andrew Raycroft looked pretty composed as well.
The Sens keep their momentum for the majority of the 2nd, with Chris Neil blowing by the slug Hal Gill and scoring, and Chris Schubert tallying as well. The momentum finally shifted a bit after Mats Sundin scored on a penalty shot. The penalty shot never should have happened as Sundin was hauled down after he got a shot off on the breakaway. But hey, even Canadian PM Harper was loving it.
The Sens continued their improved play in the 3rd, but Raycroft kept the Leafs in it. Anytime the Leafs mustered up some chances, Gerber shut the door. With Raycroft pulled at the end of the 3rd, the puck bounced off a ref's skate, right to Daniel Alfredsson, who sealed the deal with about 27 seconds left.

Notes: The final shots were 35-34 in favor of the Leafs.
*Hal Gill was atrocious. His passes were the furthest thing from tape-to-tape, and he looks SLOW.
*Forget the top two lines in Ottawa, how about the 3rd line of Vermette-McAmmond-Neil? Geez, they were unbelievable!
*Kyle Wellwood played an inspired game, but couldn't bury his chances.
*Raycroft looked alright, but it seems that he plays too far out of his net sometimes.
Leaf grades:
Offense: C+ Need to generate better chances. Feeling out process is still happening.
Defence: C- Hal Gill really ruined this one.
Goaltending: B- Raycroft looked fairly sharp, but the 3rd Sen goal was weak. He also looked a little scrambly at times.