Saturday night is alright for fighting (Leafs 5 Habs 4 (SO)

Share All sharing options for: Saturday night is alright for fighting (Leafs 5 Habs 4 (SO) 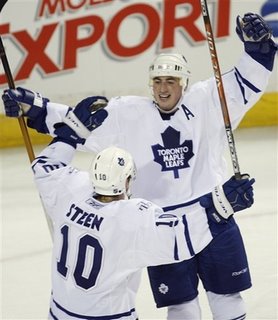 Fighting, as in the Canadiens fighting back in the 3rd period to come back from a 2 goal deficit and force this game into overtime. I don't even know where to start with this one. What an amazing finish.
The Leafs dominated the Habs right up until the half way mark of the 3rd period. They established an amazing forechecking game (which coach Paul Maurice said they would do prior to the game) that the Habs couldn't match. They outshot them about 37-16 at the halfway mark of the 3rd, and were up 4-2.
All of a sudden, Sergei Samsonov, who went from trade bait to superstar tonight, scores his 2nd goal of the night at the 13:44 mark, and the dominating Leafs lost their composure.
2 1/2 minutes later, with the Habs taking advantage of the scrambling Leafs, Sheldon Souray steps into a shot from the point and blows it right through JS Aubin, who looked weak on that one.
And now it's a brand new game. At this point, the Leafs started to regain their composure and were pressing. But so were the Habs. Aubin and David Aebischer started looking like gods.
The action was furious! The Montreal crowd (with about maybe 30% Leaf fans in attendance) was raucous and loud. The war had begun.
But nobody could score on Abby or Auby.
In overtime, the Leafs pressed even harder. But Aebischer wanted nothing to do with that, flopping around like a fish out of water and stopping everything that came his way. The Buds outshot the Habs 8-2 in the damn OT and couldn't win it. It never should have gotten this far...
In the shootout, the first shooter, Tomas Kaberle makes Abby look like Luongo and roofs it over top of the laid out goalie. Next up..Samsonov, makes Aubin look like Dan Cloutier, easily putting the puck between his legs.
From that point, 10 more shooters are all stopped by the goalies. Montreal fans are hugging eachother in the stands, literally freaking out. It feels like the playoffs.
But the 13th shooter overall, Kyle Wellwood, performs an absolute killer move on Aebischer and scores....finally. Alexander Perezhogin, who has super skills, is denied by Aubin after that, and the Leafs win it.
JS Aubin is pumping his arms with excitement, winning in his home province. The Leafs congratulate him for his stellar shootout performance.

1. Tomas Kaberle. An unofficial hat trick, from a defenceman!
2. Sergei Samsonov. Had lots of hustle and responded after being put back onto a scoring line.
3. David Aebischer. The final shots were 51-22. If not for Abby, this one could have over alot earlier.