Share All sharing options for: RED WINGS 3 LEAFS 2 (SO) 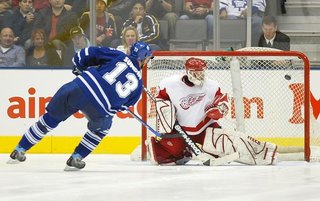 Mats Sundin scored on this shot in the shootout, but Jiri Hudler scored also in the shootout and Henrik Zetterberg scored a one-handed goal to seal the deal for the damned Red Wings.
I wish the Leafs still played in the Western Conference, especially because I miss the Leafs/Wings rivalry, a battle of 2 original 6 teams. This year they will only play eachother ONCE! Yeesh.