Reason #1 why I love this season already

Share All sharing options for: Reason #1 why I love this season already 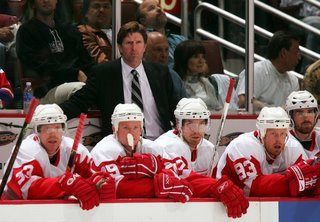 Because the mighty Detroit Red Wings aren't so mighty anymore. That alone is reason to get plastered for a week straight. How long did we have to put up with these guys dominating the Western Conference? My hatred for Detroit spans back years ago to when the Leafs were still in the West. That was one helluva rivalry that I really miss. But anyway...back to the hatred... I love the takeover of the Western Conference by teams like San Jose, Anaheim, and soon Nashville. Why? Because it's not Detroit or fucking Colorado. My pool picks in the playoffs aren't going to be from either of those teams this year. Thank God! Change is good.
I do feel an inkling of remorse for those fan bases, but that inkling is like one tidbit of sand on a 10 mile beach. Welcome to the real world guys!
Back to Detroit specifically. They are currently playing .500 hockey. They have given up as many goals as they have scored. Dominic Hasek doesn't seem to be the Dominator right now, or anymore, take your pick. Nor is Chris Osgood. Putting the 'C' on the Norris trophy-winning Niklas Lidstrom hasn't helped either. And that really is where the problem lies. I was running that by Christy as well, you can't lose 2 good Canadian veterans like Steve Yzerman and Brendan Shanahan and expect a more prominent season, especially in the case of Shanahan who still has a alot of leadership and offensive output left in the tank.
The bad news for Detroit haters? There is still plenty of skill left on that team to work themselves out of a bad predicament. The biggest factor, long and short term, is that the Red Wings' scouting staff is one of, if not the best in the NHL. That alone should give Wings fans hope, and Wing-haters fits.