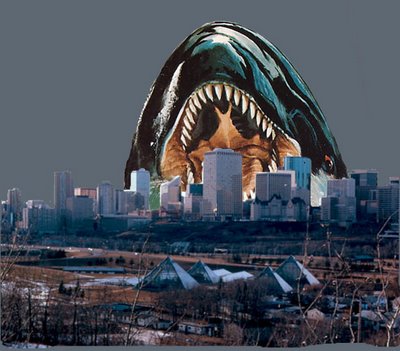 Last night's game was truly great. The Canucks played a team game in front of Roberto Luongo much like they did against the Red Wings in the season opener, making the Oilers look not only dull, but completely lost as well. Of course, alot of the Oiler fans at the Battle of Alberta are blaming the Oilers for not showing up, or Hemsky for being too fancy with the puck when he entered the Canucks' zone. That may be true in part, but a tight defence can also make the opposing team look completely flat.
As for tonight's rematch in Edmonton, expect a different game completely. According to James Mirtle, Roberto Luongo will sit this one out, and newcomer Dany Sabourin will get the start. Remember, Sabourin only played one period with the Pens last year, and allowed 4 goals against. But he had a great season with the Penguins of the AHL.
So it's a toss up. If the Canucks play as well as they did last night, the towel boy can put the goalie pads on and finish on the winning end. But I would bet that the Oilers come out flying and hitting tonight, and the game will be much less one-sided.
If you are superstitious at all, I have a gem for you. Temujin of West Coast Chaos will be at the game tonight cheering for the Canucks. Every Canuck game he has been to, (and there has been a handful), the Canucks have LOST. OOOO, bad omen!