Oilers Get Revenge, Kill the Orcas.

Share All sharing options for: Oilers Get Revenge, Kill the Orcas. 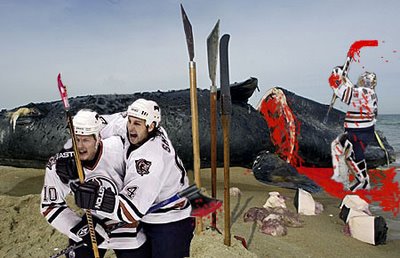 What a bummer. Dan Sabourin allowed 2 goals on the Oilers' first 2 shots of the game. My first impression was..'oh fuck, this is going to turn out like the Sabres/Flyers game.' But then Sabourin settled down, looking shaky and awkward, but keeping the puck out nonetheless. The rest of the Canuck team could not score any goals on Jussi Markannen until the end of the 3rd period, when Naslund scored a PP goal, and in some ways, the Oilers played the same type of defensive hockey that the Canucks had played in the previous outing. Once again, the Oilers didn't bring their 'A' game in my opinion. It could have been worse.
The problem of the Canucks getting secondary scoring is front and center again. It does not look like they will be getting any immediate help from guys like Burrows, Bulis, Chouinard, or even Morrison.
The bright spots offensively seemed to be the Sedins, Kesler, and Salo, who had seemingly plenty of chances.
The rest of this stupid fucking game I can't really remember because of this pompous, loud-mouthed, bullshitting moron sitting at our table buying us drinks so we could be his friends. Every time he bought a round, he would yell: "Raise your glass! Here's to the Canucks getting 2 goals to tie it, and to the slap shot to win the game in overtime!" I'd potentially forgive him for being a dumbass because he bought us drinks..but Sambuca and some overly sweet Hazelnut flavored shooters don't cut it! Gad! 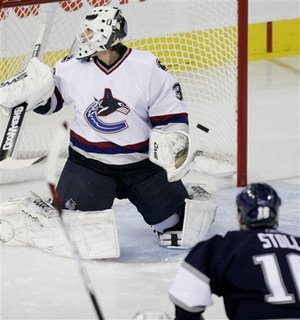 Look at this photo, and then forget that incident ever happened. For the record, Sabourin finished the game with a .900 save percentage, if that makes you feel any better!
I made that Photoshop image a couple days ago, so I am fully aware that Roloson didn't play, and that those are road jerseys! Hope you get a kick out of it anyways.. I'm still learning.