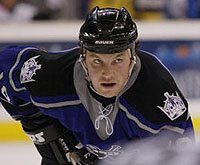 Thank you to reader/commenter J Tron for the link to this interview with Super Pest Sean Avery in Toro Magazine. I hate to say it, but in some ways I understand and agree with what Avery is saying. Alot of times I get judged for spouting of what I think as well, or am accused of being too honest.
But a real talent is having the power and ability to control what you say, and when and how you say it. Avery's mock on French Canadians hiding behind visors last season was wrong, even if there was a tad of truth to it. But there really was no point in singling out French Canadians when there are players from every race and culture who do it. Avery doesn't think before he speaks.