Share All sharing options for: Nonis vents his feelings 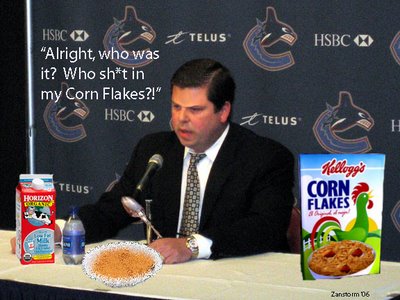 ----Due to the graphic nature of what is inside Dave Nonis' bowl of cereal, I have decided to censor the bowl specifically.-----

As reported by TSN via the Canadian Press, the Canucks' GM has vented his opinions on the NHL's new policy on free agents and the current scheduling at a Chamber of Commerce meeting.

"I think we have a free agency age that is a joke. Pittsburgh is going to put seven years of development money into him and he can leave when he's 25. I think if you assemble a good team, fans want to see that team stick together for more than one or two years. Our current agreement does not lend itself to that."

Here is what Nonis said about the current scheduling system:

"I hate the schedule, It does nothing for us. We should play every team in the league at least once. We all pay the same dues and right now the western teams are getting it right in the teeth for no good reason. We fly as much as we ever did and the eastern teams don't do a bloody thing."

And more tirades about the free agency:

"I think the (salary) cap is necessary to keep some teams from spending wildly," he said. "It has levelled the playing field."

"If you are a team that is struggling, it's a good thing, being able to get new faces, it helps generate interest in your market.
If you are a team that is having a hard time holding your team together because of free agency and players are leaving, then it's not necessarily a good thing. You may lose the continuity a lot of markets enjoy.
The Detroit Red Wings could have a five-year run if they did a good job of recruiting, trading, drafting and developing," Nonis said. "You could keep those players together.
You are going to see movement among players every single year. To me, that's the worst part of our agreement. Get used to it. It's not going to change."
Nonis disagreed with a notion that division rivalries were created and enhanced by the new schedule.
"Rivalries are built through playoffs," he said.
"I know the reasoning behind the schedule, I know why they did it. I don't necessarily agree that it is a good thing. It doesn't save us any time, we're not saving any money on travel and I know our fans want to see us play every team at least once."


NHL general managers will be having a meeting on November 7th, and the scheduling will be one of the topics discussed. I would anticipate this type of schedule to be changed by next season.