A new era in Philly

Share All sharing options for: A new era in Philly 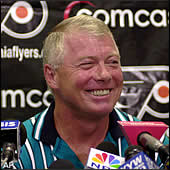 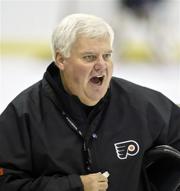 Hitch: "Hey Bobby, I hear you got fired!"

Clarke:"Nah, I fired myself, and then took you down with me!"


After their worst start in 15 years, the Flyers have cleaned house. Ken Hitchcock was fired early this morning, and Bobby Clarke was allowed to resign. Owner Ed Snider said that he had thoroughly investigated the team throughout after the Sabres destroyed the Flyers 9-1 last week, and made the proper decision.

"It's difficult to let a coach of his calibre go," Snider said. "It was not done frivolously."

Hitchcock had this to say:

"I'm disappointed we weren't able to bring in the Cup," Hitchcock told the Canadian Press. "It's disappointing, personally, I wasn't given the opportunity to turn it around."


Clarke was the Flyers' GM for 13 seasons.

"I deeply regret not being able to bring a Stanley Cup here," Clarke said solemnly on Sunday. "I didn't deliver."
"I recognized myself that I hadn't been very good," Clarke said. "It wasn't because of our record, I can guarantee you that.

Yeah, and the team that you created was falling apart.
Paul Holmgren will take over Clarke's position. Apparently, according to Clarke and other sources, Holmgren was making alot of Bobby's decisions already, as Clarke was suffering from 'burnout.'
John Stevens former coach of the Philly Phantoms and who was assistant coach for the Flyers this year, has been promoted to head coach. Snider likes how Stevens has already worked with the youth on the Flyers, winning a Calder Cup in 2005.
"John Stevens has quickly proven that he can coach in the National Hockey League," Snider said. "He worked very closely with many of our younger players when he coached them as Phantoms. We believe that we have a core of great young talent and we think that John is the right guy to coach this team."
It's funny how I was just saying to Hodge and Beaner last night that Bobby Clarke wouldn't be going anywhere anytime soon. I though he was untouchable. In the end he kind of was. Letting him resign was a polite way of letting him go after 40 years of service as a player and in management.
Anyone think Clarke will take another GM job elsewhere? Does anyone feel remorse for Bobby? Me neither. It's kind of funny to think that as a GM, Clarke will be remembered most for his acquisition of Eric Lindros, and what he gave up to get him. Oh yes, and then the whole feuding that occurred between them for all those years. To his credit, the Legion of Doom line was pretty good. He did assemble a team that went to the Finals against Detroit in 1997, and was the GM with their success in the 80's as well. But controversy followed him everywhere.
I know Hitchcock will be back someday. Right now, he's probably eating about 50 cheeseburgers and waiting for the next coach to be fired somewhere.