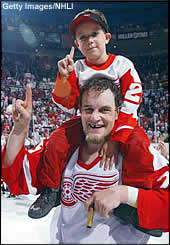 Darren McCarty has seen better days. He filed for bankruptcy last April and is now auctioning off some of his prized possessions. These include replica Stanley Cup trophies, various jerseys, photos, a Harley, Corvette, motorboat, and alot of other collectibles from his career. But the most significant items will be his 3 Stanley Cup rings that he earned in his years with Detroit. I wonder how much sentimental value those hold for him still.
Officially he has $1.9 million US in assets, and is $6.2 million in debt.
But hey, let's not focus on the negative. McCarty is a tough, gritty, and funny character. Check out the clip.