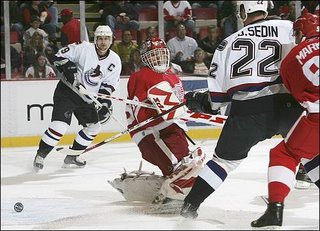 Remember a time when this very picture was reversed? By which I mean it was the Red Wings swarming around a cage-masked Dan Cloutier who was looking around feverishly for the puck only to find it in the net already? Ahhh...good times.

Canucks played very well last night, although in hindsight I don't remember anyone really standing out other then Luongo who was just as solid in net as billed all summer long. My god it was nice to know, when Detroit was pressing, I didn't have that "please don't shoot it" mentality in my mind that Cloutier/Auld/whoever else created for me after years and years. Besides Naslund and the Sedins cycling like madmen, I thought Bieksa (whom I feel like I never really saw under the Crawford regime) was pretty solid in his own zone, but probably needs to work on those points shots (I believe Salo can help him on that).

What concerns me a bit are players I really did not see at all (Pyatt), injured players flying around and slamming into objects and fellow human beings (Morrison) and players who really need to gel a bit better with their linemates so they know not to go offside. Twice. In a row. In the opening minutes (Bulis).

Overall it was a solid effort from a new team-first Canucks squad (damn that sounds strange). Protecting leads and playing well defensively was such a strange thing to see, but I can get used to it with results like this.

In the spirit of the Vancouver Canucks OpEd's drunken live blogs from last years Stanley Cup run, I'm thinking (since I'm a rookie at this entire blog thing anyway) I'm going to give it a whirl tonight. It also helps that:

1. I have little money to go out anyway thanks to going balls to the walls last Sunday for football
2. I hate Ohio
3. I extremely dislike Anson Carter
4. I extremely like Nikolai Zherdev (Yes I do. Sue me.)
5. My roommate is gone so I can act like a complete idiot and not reminded of it

By the way, James Mirtle loves Luongo as a Canuck. Something tells me that trend is going to continue if he plays like this everynight. I wonder how Panthers fans feel seeing last night's game...

(Picture courtesy of the Detroit News)