Lewis does the Boston Bruins Shuffle

Share All sharing options for: Lewis does the Boston Bruins Shuffle 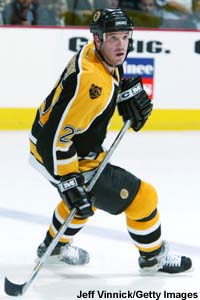 Dave Lewis is growing impatient with his teams' lack of scoring, so he has shuffled his lines some more. Glen Murray will now play on the B's top line with Patrice Bergeron and rookie Phil Kessel. Brad Boyes will play on the second line with Marc Savard and PJ Axelsson. Marco Sturm's fantasy has dropped considerably now that he is playing on the 3rd line with Shean Donovan and Wayne Primeau. And finally, the only line left untouched by Lewis is the 4th line, which is made up of Yan Stastny, Mark Mowers, and Jeff Hoggan.
It is rather suprising that the Bergeron-Sturm-Boyes line hasn't worked out so far. Who would have seen that coming? Hopefully the Bruins can pick things up soon. As it stands right now, they are LAST in the Eastern Conference with only 3 points (1-3-1). In their first 5 games they have scored only 10 goals, and allowed 21 against. Does anyone else agree with me in my prediction that Dave Lewis will be fired before Christmas?