Leafs vs Thrashers tonight: This could get ugly!

Share All sharing options for: Leafs vs Thrashers tonight: This could get ugly! 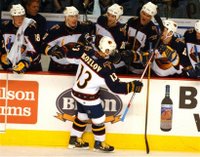 All you have to do is look at the faces of some of the Sabres fans on Saturday night, as the streaking Thrashers ended Buffalo's chance of achieving the reocrd for wins at the start of the season. The Thrashers are 2nd in the Eastern Conference with a 8-1-2 record, and are not showing any signs of slowing down.
What are the Leafs' chances? I liked their effort against Montreal on Saturday, winning in a shootout. But the Canadiens only showed up for for brief periods of time in that one. I don't like how the Leafs panicked as soon as the Habs put on some pressure. It reminded me of the Pat Quinn era. I don't think that they are giving 100% for 60 minutes either. The Thrashers are. And their record is a testament to that.
Marian Hossa has not scored in 3 games, after getting off to a red hot start. Hopefully he doesn't break out tonight.
We should expect Bobby Holik, who has drawn praise from his coaching staff for his great 2-way play, to be all over Mats Sundin tonight, neutralizing him.
The Thrashers are averaging 3.75 goals per game. The Leafs: 3.33 goals per game.
A bigger difference is goals against per game. The Thrashers have a 2.58 goals against average. The Leafs have allowed an average of 3.91 goals per game.
That stat is what makes me think that the Thrashers will win this one about 5-3.
If the Leafs do pull out a win, it should be a major confidence booster. But they need to play a solid 60 minutes to stop a team like Atlanta.