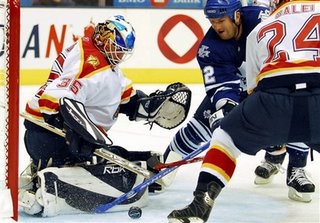 I missed this game because of Thanksgiving dinner, and it sounds like it was a beauty. Mats Sundin scored the winning shootout goal for the Buds, but the real story of tonight's game was the superb losing performance by Alex Auld. He stopped 47 Leaf shots in the game of his life and the suddenly dried up Florida offence couldn't provide a good supporting cast.
Auld was most upset by Sundin's shootout goal of all things, at least in the post game interview anyway.
"The most frustrating thing is knowing exactly what Mats is going to do and he still puts it by you," Auld said. "Every shootout he puts it upstairs. That's his thing."
Auld even got a scouting report from former Leafs goalie Ed Belfour, who told Auld that Sundin would go high. Eddie the traitor! Haha!
But the Leafs will take it. They are now 2-1-1 to start the season. It should be noted that the Leafs looked more disciplined and only took 3 penalties. The Panthers took 7. Andrew Raycroft was sharp again, stopping 24 of 25 shots. The Almighty Kyle Wellwood got another point (goal) and still leads the team in scoring.
Box score
...............
***Uh oh, the Nash-Zherdev-Vyborny line is flying again!
***Anson Carter got his first goal of the season tonight as the Blue Jackets turned the Coyotes into poodles (5-1) tonight.