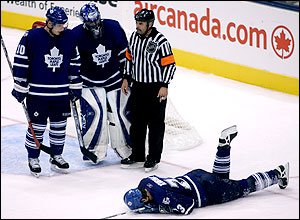 Without surgery, Kubina should be out about a month, which is a relief. It was expected to be worse. The Leafs have alot of of blueliners out right now including Brendan Bell and Andy Wozniewski (who should return soon), Carlo Colaiacovo and Steffan Kronwall. It's a good thing the Leafs are deep in defensive depth. Or they could play McCabe and Kaberle for 40 minutes per game! Those 2 continue to pile on the icetime.
------
Coyotes' D man Keith Ballard will be out of action for at least a month due to a fractured right hand. Ballard has skills and the Dogs will miss him.

Kings Alyn McCauley underwent anthroscopic knee surgery yesterday and is expected to be out until early November.

Blue Jackets Dan Fritsche suffered a seperated left shoulder and will be out a month.

Sid Crosby caught a high pass during practice and it stung his hand. He complained to his trainer Chris Stewart that he may have significantly injured his hand. But after Stewart examined him, he said: "Sid, you are acting like Mario. Don't be such a pussy, it's only a bruise!" (heheh)

***Line changes: Anyone have Radim Vrbata in their pool? Didn't think so. But he has just been promoted to the Black Hawks' top line with Martin Havlat and Michal Handzus. Remember, he had 34 points in 45 games on a dog crap Chicago offensive line last season. So he will soon become a hot fantasy pool commodity I bet. Free info from Zany-you're welcome.

Richard Zednik has been nothing short of sucky in Washington so far this season, and has been demoted to a checking line. He hasn't been shooting pucks at the net and is a -4. So if you have Zednik, drop him for Vrbata, and then tip me $5 from your winnings at the end of the year.