Share All sharing options for: Hurricanes raise Cup banner, then lose to Sabres 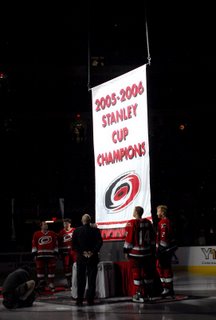 That was cool. The first bit of regular season hockey I watched today was the Stanley Cup banner being raised in Carolina. It was like picking up where we left off last spring. It still gave me that chilling feeling this afternoon, seeing the Cup being brought to center ice and then the banner being raised, as well as the Division and Conference Champion banners. It was a great moment again tonight for the Hurricane organization and their fans.
Speaking of fans, the Acid Queen was at that game tonight, and she was joking on her blog that she would be wearing riot gear! I don't think she has made it home yet, but check her site out for abit of insight into the game tonight from a Caniac who was there.
The Sabres won the game in the shootout, with Daniel Briere scoring a highlight reel goal to give the Sabres the win.